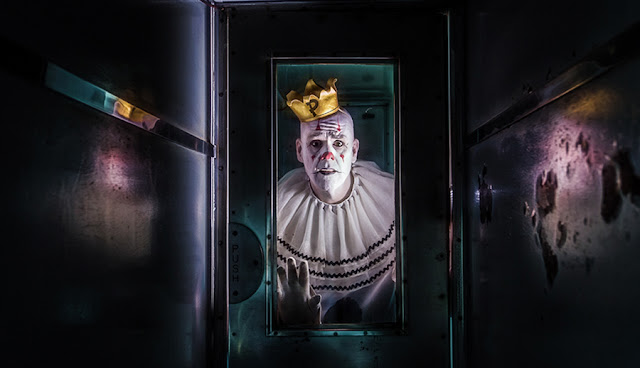 This might be the saddest Wacky Wednesday of  all time.

Puddles, the creation of Big Mike Geier of Atlanta, Ga., specializes in straight-faced (if white-faced) covers of familiar songs.

The near-seven-foot clown has been at it since the '90s when he led an all-clown band called Greasepaint. In 2013, his cover of Lorde's "Royals" propelled him to his current Internet cult status. It's received more than 18.5 million views on YouTube.

Last year, The New York Times wrote of Puddles, "... his special effect is a textured voice laced with melancholy. His emotional warbling adds heft to his frowns. ...  What makes him transcend the trope is his vulnerability."

I included a Puddles Pity Party video -- his version of Leonard Cohen's "Hallelujah"-- about a year ago in my Wacky Wednesday post about singing clowns. But Puddles is still at it, so I think he deserves a post of his own.

Let's start out with a Bee Gees song that's a natural for the Pity Party treatment. Clearly, the joke was on Puddles

Puddles teams up with Nicole Atkins on this wimp-rock classic, "Reflections of My Life" by the proto-Air Supply group, Marmalade.

And on this recent one Puddles covers Los Lobos' "Estoy Sentado Aqui."

But let's end on a happy note.  one of Puddles' rare tunes that's devoid of melancholy. I must have seen this mash-up of "Pinball Wizard" and "Folsom Prison Blues" a thousand times on my Facebook feed in recent weeks.