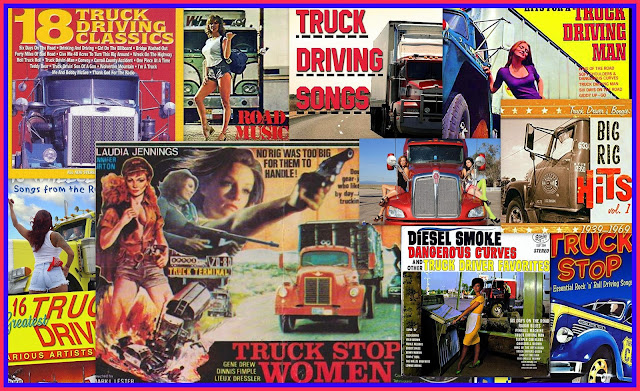 An overflow crowd at a public meeting in Santa Fe showed up to protest a proposed Flying J truck stop off I-25 south of the city.

According to a news story by my Santa Fe New Mexican colleague Justin Horwath, residents of the nearby Rancho Viejo neighborhood claimed the truck stop would bring unwanted traffic, crime and pollution. One guy even warned of the danger of light pollution coming from a 24 truck stop.

In other words, a fairly typical Santa Fe NIMBY battle. I must have covered a million of 'em back when I had the City Hall beat.

But for a lover of vintage country music, there just seems something un-American about attacking a truck stop,

As any serious country music fan knows, a truck stop is a hallowed place, an oasis on the highway, where a pretty waitress will pour you another cup of coffee (for it is the best in the land!)

A truck stop is where the brave men and women who bring the food to our supermarkets, and other goods to our stores can take a shower, grab a burger and a piece of pie and share a little face-to-face conversation with fellow humans to relieve the tedium that white-line brings.

Whenever someone protests a truck stop, somewhere out on the Lost Highway, the ghost of Big Joe sheds a quiet tear as he drives his Phantom 309 through the shadows.

O.K., I'll stop. Enjoy some classic American truck driver songs. Most of these have been banging around in my head since I read Justin's story,

I first heard "Truck Drivin' Man" done by Buck Owens. But it was written and first recorded back in 1954 by an Alabama-born singer named Terry Fell.

UPDATE 7-8-17: Wow! Just a couple of weeks after I posted this, someone yanked the Terry Fell version off of YouTube. So I guess we'll just have to settle for the Buck Owens cover.

Dave Dudley --  born David Darwin Pedruska in Spencer, Wisc. -- is best known for his truck-driver songs in the 1960s. His best-known song is this hit from 1963.

Red Simpson was a pioneer of the Bakersfield Sound as well as an important purveyor of truck driving songs. "Roll, Truck Roll" is my favorite Simpson tune.

Kitty Wells, one of the giants of 1950s country music, sang a sweet testimonial to truck stop waitresses

Dick Curless, a New Englander who wrote many truck driving songs in the 1960s, did this song about "truck stops with swingin' chicks" in this tune called "Chick Inspector."//

Here's another Red, Woodrow Wilson "Red" Sovine, who made it big with truck driver tunes. He's responsible for the spooky "Big Joe & The Phantom 309." This maudlin little weeper, also a "talking" song -- or maybe you can call it "white rap" -- was even a bigger hit for Sovine. It's about a guy who drives a truck called the "Giddy Up Go."

But this one is my favorite truck driving song of all time. I prefer the version by New Mexico's own Last Mile Ramblers, who performed and recorded it back in the '70s. But a Texan named Doye O'Dell was the first to record "Diesel Smoke, Dangerous Curves" back in 1952. The song features a hotshot steel guitarist named Speedy West.

You can bet your bottom dollar that I'm going to play a big load of truck driver songs on The Santa Fe Opry Friday night on KSFR.