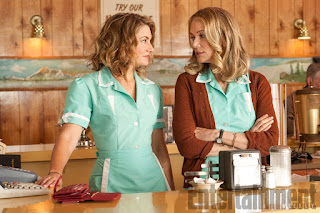 TRIBUTE TO THE AMERICAN WAITRESS
Tip That Waitress by Loudon Wainwright III
The Beautiful Waitress by Terry Allen
She's a Waitress (and I'm in Love) by 5 Chinese Brothers
Waitress Song by Freakwater
Mr. Sellack by The Roches
Waitret Please Waitret by Kinky Friedman with Little Jewford
Highway Cafe by Jesse Dayton

I Won't Back Down by Johnny Cash
Wildflowers by Chris Hillman
End of the Line by The Traveling Wilburys
Old, Fat and Stinky by The Imperial Rooster
Midnight Train by David Rawlings
Dead Thumb King by Ray Wylie Hubbard
CLOSING THEME: Comin' Down by The Meat Puppets