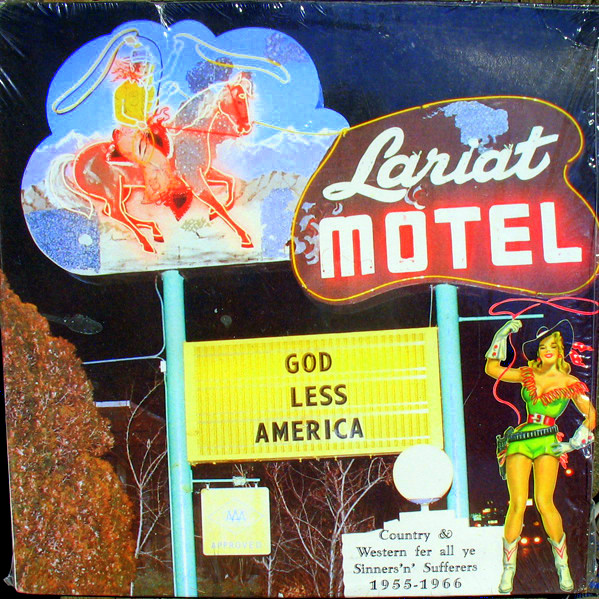 Maybe it's because I just started watching the new Netflix western series Godless. But somehow today I couldn't get this crazy country compilation out of my head.

Released back in 1995 by the wonderful Crypt label -- yes, that outfit responsible for the influential 60s garage music series Back from the Grave and the sleaze-sational Las Vegas Grind compilations -- God Less America is a collection of obscure country non-hits mostly by artists you've never heard of.

Covering the years between 1955 and 1965, the subject matter covered here includes murder, drugs, insanity and, on one track, a little boy pleading with his mom not to become a topless go-go dancer.

Several of these songs are included in the sprawling, multi-volume series Twisted Tales from the Vinyl Wastelands -- which I've blathered about several times here. (See THIS, THIS, and THIS )

But for a distilled, single-volume collection of hillbilly weirdness, nothing beats God Less America.

But you can listen to several songs from it right here for free!

Probably the most famous of the contributors to God Less is Eddie Noack -- yes, the first guy to record "Psycho." It's a pretty song about a serial killer who tried to warn his latest victim.

This one is a spoken-word masterpiece by Horace Heller.

Chances are you've never heard of Country Johnny Mathis. But he sang a sweet tribute to Caryl Chessman, a convicted California murderer known as the "Red Light Bandit" who was executed in 1960. (Supposedly Chessman inspired Merle Haggard, who met him him at San Quentin prison, to write "Sing Me Back Home.")

Arky Blue & The Blue Cowboys warn about popping too many pills

Finally, here is the sad story of little Troy Hess who's ashamed that his mama works as an exotic dancer in a gentleman's club.