WACKY WEDNESDAY: Songs of the Puppets 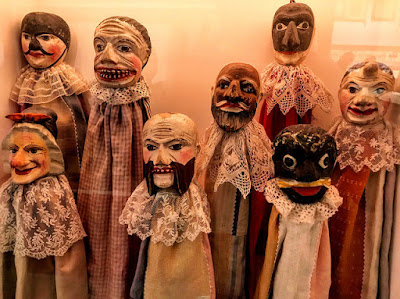 I'm a few days late, but I'd like wish each and every one of you a happy World Day of Puppetry!

According to the Puppeteers of America website, March 21 is the day to honor the puppets among us.

Puppetry in America is older than the country itself, but until the beginning of the 20th century, puppet shows were rare. Puppeteers kept their art a closely guarded secret, certainly not shared with the public. In the first half of the 20th century, some puppeteers (most notably Tony Sarg) helped to lift the veil of secrecy, sharing information about their work, which led to the formation of the Puppeteers of America in 1937...

Today, almost three quarters of a century onward, puppets hold a place in the public’s heart that is rivaled by few other arts. They appear on stage, in movies, on television, and now, on the Internet. The Puppeteers of America is proud to present this National Day of Puppetry taking place all over North America and brought to you by the local Puppeteers of America guild in your area.

I'm not even sure there is a Puppeteers of America guild in my area. But that doesn't matter. Puppets and music go together like peanut butter and bacon.

Listen to the puppets sing!

One of the first ventriloquist dummies I ever saw as a kid was Jerry Mahoney. Here he is singing with his special friend, Paul Winchell

There was a real chemistry between Andy Gibb and Madam