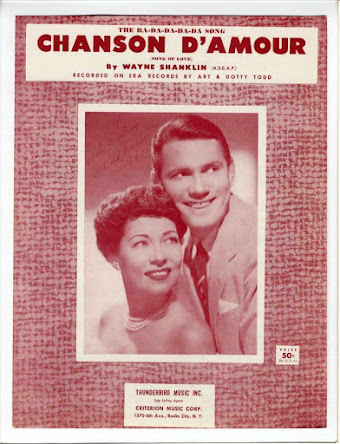 Just a couple of weeks ago in a Throwback Thursday post about Lawrence Welk, I included a video of Sandi Griffith and a bevy of Welk beauties singing an old pop hit "Chanson D'Amour," cracking wise that "My sources in the Drug Culture community warn that it's NOT SAFE to view when you're stoned!"
I'm such a card!
But in all seriousness, this is about a song that's haunted me since I was a little kid. It seemed so foreign, alluring, with an undercurrent of danger hiding behind false wholesomeness. And the recurring "ra da da da da" is just this side of sinister.
I have a very distant and very vague memory of seeing the song performed on my mom's old black and white tv. I don't know who was singing it. Maybe it was the unforgettable, but largely forgotten Art & Dotty Todd, the first to record "Chanson" in 1958. Their video below did seem to jog some memories. However, for most of my life I assumed the singers were French.
But that's incorrect. Art & Dotty were American lounge singers. And while the title is French, the song is not from France. Songwriter Wayne Shanklin was born in Joplin, Missouri. "Chanson D'Amour" is as American as French toast.
Here's Art & Dotty's version, introduced by Dick Clark on horseback!

Though the Todds were the first to record "Chanson," a group called The Fontane Sisters, a New Jersey group,  recorded it almost immediately after Art & Dotty. Both were released in March 1958. Here's the Fontanes' version:

By the mid 1960s, the song had been passed around and recorded by many of that era's major monsters of schmaltz: The Lettermen, Sadler & Young, Ray Coniff ... Even The Mills Brothers took a stab at the "Song of Love":

Apparently "Chanson" even made it to ... France. Here's Edith Piaff:

In the mid-'70s, "Chanson" was revived by the retro popsters Manhattan Transfer. The single was big in Europe, though didn't make much of a splash in the U.S., where cynics scoffed, "They're no Art & Dotty!"

I was hoping to uncover some obscure R&B or bluegrass or polka or zydeco or speed metal versions of "Chanson D'Amour" but came up empty-handed. However I did find  this gem by The Muppets!