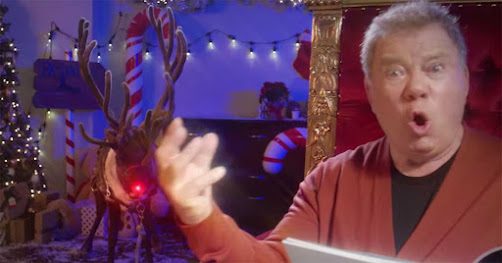 In these troubled times, it's extremely important to embrace our most cherished Christmas traditions. Such as celebrities who have no business singing crooning corny Christmas songs.

In case you forgot, here's what a Golden Throat is, ere is how I've explained it before:

Back in the '80s and '90s, when Rhino Records was actually a cool label, they released a series of albums called Golden Throats. These nutball compilations featured movie and TV stars, sports heroes and every stripe of cheesy celebrity singing ham-fisted versions of songs they had no business singing. Pop tunes, rock 'n' roll hits, country song, whatever. Nothing was sacred and nothing was safe from the Golden Throats.

Because of the exposure from the Rhino series, some of these unintentionally hilarious songsters became notorious and ironically hip. Think William Shatner -- the Elvis of the Golden Throats! -- and his over-the-top renditions of "Lucy in the Sky with Diamonds" and "Mr. Tambourine Man."

So let's start off this Golden Throat Christmas Special with this turkey from Walter Brennan:

And let's go home for the holidays with the always poignant William Shatner, aided and abetted here by ... Billy Gibbons???????