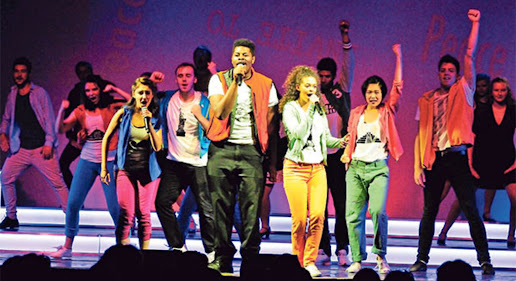 They never had a radio hit, they never made the cover of the Rolling Stone,  they've somehow eluded the Rock 'n' Roll Hall of Fame (though I'd argue that several inductees in recent years are just as lame, if not worse).

But since the mid 1960s, the traveling musical troupe known as Up With People has traveled the world, including, probably, a high school auditorium near you spreading their weird, clean-cut cheer and saccharine platitudes. They played not one, not two but five goddamn Super Bowl halftime shows between the mid '70s and mid '80s. They've performed for presidents and foreign leaders.

There have been more than 22,000 members from more than a hundred countries.

And yet some people -- including former member, actress Glenn Close -- have compared Up With People with religious cults. And in fact, the group sprang from an "alternative" religious movement called Moral Rearmament. (Close's parents belonged to that group, and Glenn spent her teenage years and early 20s under its spell.)

Up With People was started by a Moral Rearmament member from Arizona named J. Blanton Belk, According to a 2012 story from Inside Tucson Business:

During the turbulent 1960s, a prevalent scene in the U.S. was one of hippies occupying university presidents offices. It was a time of demonstrations, around the world from the University of California in Berkeley to the Sorbonne in Paris, and to San Marcus University in Lima, Peru.

Belk was at a point in his life when he was ready to take on a big challenge. He gathered student leaders from half a dozen universities challenging them to find a “positive voice” as an alternative to what he regarded as the negativism of the times.

Chances are you've probably heard Up With People's self-titled theme song, the one that goes "Up up with people, you meet 'em wherever you go ..." -- and possibly you even agree with the song's sentiment "If more people were for people" the world would be a better place. And maybe you remember one of their better known songs, "What Color is God's Skin?"

But I'd be willing to be bet that you probably haven't heard many of the other 300 songs or so written for Up With People over the past 50-whatever years. Well, that's what this blog is for.

Let's start with one written and sung by a young Glenn Close, "Run and Catch the Wind" (no relation to the similarly-titled Donovan song from that era.) And check out the endorsements from John Wayne, Pat Boone and Walt Disney on the album cover!

Here's one from Up With People's snazzy orange sweater period, "Where the Roads Come Together":

Up With People Get funky with this 1970 tune called "Man's Gotta Go Somewhere":

Finally, here's "Stand Up Now," a fairly recent one (2012) that has an anti-bullying message:

So I hope you agree with me that UP WITH PEOPLE KICKS ASS! 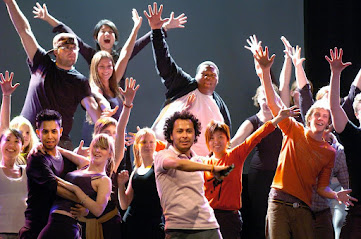 Check out other "Deep Cuts" posts from this blog: