I'm still stunned about the death of The Godfather.

I just located the story I did for The New Mexican when I saw James at the Pit in Albuquerque in 1999.

A version of this was published in The Santa Fe New Mexican
October 7, 1999 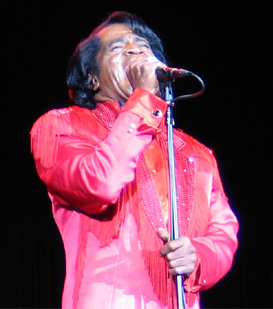 ALBUQUERQUE During the middle of James Brown's concert at The Pit Tuesday, the singer known as The Hardest Working Man in Show Business spent a good deal of time in front of the drummers, his back turned to the audience.

Sometimes it looked as if he was conducting the band, but in the hands of the capable 14-piece outfit called The Soul Generals, the music seemed to take care of itself.

Sometimes it seemed as if Brown was spending that time recharging his psychic batteries. Every so often he'd turn around and let loose one of his patented shouts ``Hit me!'' or ``Good God, ya'll!'' or he'd do a little dance just a snapshot of the crazy-legged soul gymnastics he was capable of when he was but a young man, but it still drives a crowd wild.

Or maybe he was just contemplating the James Brownness of it all, the music giving rise to powerful memories.

Imagine the jumble of images passing through the mind of James Brown as the music plays. ``The Big Flashback'' he might call it, as he recalls shining shoes in front of that radio station he'd later own; Bobby Byrd; The Famous Flames, Please, Please, Please!; shaking off his cape in the T.A.M.I. Show movie back in the '60s and screaming for redemption; ``Maceo!'' (He's got a new sax player now and he's great too, but you know sometimes James still has to shout ``Maceo!''); stopping riots in smoldering ghettos of the '60s; Cold Sweat!; ``Spotlight on James Brown, ya'll! He's the King of them all, ya'll!''; embracing Nixon and ``Black Capitalism'' in '68; ``Hot Pants!''; trying to outrun the cops on that South Carolina highway; ``Hit me!''; Living in America!; all the stages, all the wives, all the drugs, the jails, all the music; ``It's Star Time....'' The Albuquerque audience consisted of 50-ish My Generation folk, some of whom brought their children; teens and young adults, many of whom came to know The King of Soul from samples on rap records; people dressed all swanky, as well as the T-shirt-and-jeans set; black, white, Hispanic and Indian.

There was something kind of sad about the fact that an ``oldies'' radio station was sponsoring Brown's Albuquerque show. Although indeed most of his ``hits'' are old enough to run for president, and even though he's 66 years old (some say more), and even though all but a smidgeon of his material Tuesday was from the '50s, '60s and 70s, nobody wants to think of James Brown as an oldie but goodie. At the very least, he's one of the great innovators of popular American music. And some of us believe he's a supernatural force offering a glimpse into a higher realm.

It didn't seem right that some cheeseball had sold advertising space and put banners for a local limousine company and some business called cyber-somethingorother on the stage of The Godfather of Soul.

But then again, James Brown has always been a big-time update of old Southern traveling burlesque revues or even medicine shows the warm-up numbers by the band, the seemingly worthless female singer who sang three boring songs just to add to the anticipation, the ritualistic ``Star Time!'' intro, the three sexy dancers who took the stage every so often Tuesday.

Heck, Brown even had a stage magician come out in the middle of the show to perform dumb tricks as the band vamped behind him. You almost expected him to start pitching King Flour biscuits or Doc VanDexter's Tizzic Tincture.

But the real magic was performed by Brown himself.

If he didn't play all the hits, he played enough to satisfy: "Cold Sweat," "It's A Man's Man's Man's World", "Try Me," "Pappa's Got a Brand New Bag" and the obligatory "I Got You (I Feel Good)," (which unfortunately has lost some of its power after years of use in floor wax commercials.) Once or twice he forsook the microphone to play an ultra-funky electric organ, a talent many didn't realize he had.

By the final tune an extended jam that started out as Sex Machine and built into a blast of undiluted cosmic funk he proved that James Brown is still Soul Brother Number One.
at December 25, 2006