A version of this was published in The Santa Fe New Mexican
December 8, 2006

One of the strangest, most powerful forms of music to rise from the American South is Sacred Harp singing. Those familiar with Harry Smith’s Anthology of American Folk Music have heard the simple, mysterious sounds. T Bone Burnett used some Sacred Harp in his soundtrack for Cold Mountain a few years ago. Alan Lomax did field recordings at Sacred Harp gatherings.

It’s a tradition that’s populist in nature. There are no Sacred Harp “performances” because there’s no separation of performer and audience at a Sacred Harp “singing.” Everyone is supposed to sing. And thus comes a new Sacred Harp compilation: I Belong to This Band. 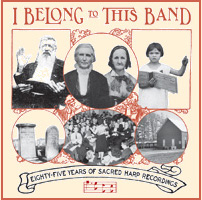 Released by the independent Dust-to-Digital label — the same folks who brought us the impressive six-disc box set Goodbye Babylon (featuring Southern gospel music from 1902 to 1960) a couple of years ago — this collection spans nine decades of recorded Sacred Harp music, from the first known group to record in 1922 (The Original Sacred Harp Singers were “probably from Texas,” the liner notes say) to an Alabama singing recorded in July of this year.

So what is Sacred Harp music? First of all, it’s “sacred” music, but there’s no harp. It’s usually a cappella music so named for a hymnal called The Sacred Harp, first published in 1884 but updated several times since.

The book, and others like it, used shapes — triangle, oval, rectangle, diamond — for the various notes. (It’s supposed to make it easier for average folks to read music, but it seems pretty complex to a rube like me.)

The songs feature four-part harmonies. Though it can be done by small groups, normally Sacred Harp is choral music. At a singing, the room is divided into four sides — with trebles, tenors, basses, and altos in their own sections — with rows of chairs facing the center, where a leader stands.

Typically, Sacred Harp songs start off with what sounds to a newcomer like an incomprehensible incantation, a magical invocation in a long-dead tongue to dusky, hoary spirits. I actually was disappointed to learn that what I thought was mystical speaking in tongues is nothing more than the choir singing “mi, fa, so, la ...” to get the song going.

The rhythm of the songs sometimes seems almost martial. In songs like the minor-key “Child of Grace,” the foot stomping is audible. You can almost imagine the singers marching on some of the tracks.

A few of the songs in the collection have military overtones. “The Christian Warfare,” by the Original Sacred Harp Singers, was written in 1835 and seems to anticipate current foreign policy:

“I’m called to contend with the powers of darkness,/And many sore conflicts I have to pass through./Oh Jesus, be with me in every battle,/And help me my enemies all to subdue.”

But the sweetness of the melody suggests that the battle at hand is more metaphorical than literal. 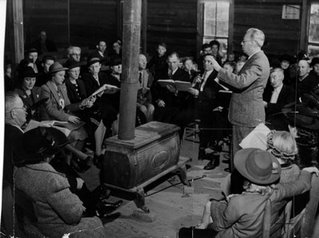 Then there’s “Christian Soldier.” Recorded in 1928 by the Denson Quartet, it’s a song written by Isaac Watts in 1724. It sounds a little more militant.

“Must I be carried to the skies/On flow’ry beds of ease,/While others fought to win the prize/And sailed through bloody seas?/Are there no foes for me to face?/Must I not stem the flood?/Is this vile world a friend to grace,/To help me on to God?/Sure I must fight if I would reign;/Increase my courage, Lord,/I’ll bear the toil, endure the pain,/Supported by Thy word.”

One of the most interesting tracks is “New Morning Sun,” recorded in 1960 by S. Whit Denson. Using then-novel multitracking technology, Denson — an original member of the pioneering Denson Quartet — sang all four harmony parts and played piano.

Nearly half of the tracks on this collection are from the Henagar-Union Sacred Harp Convention at the Liberty Baptist Church in Henegar, Ala. (home of the Louvin Brothers). While not as “historical,” they are some of the most powerful performances on the album. A potent, if troubling, tune they perform is “Whitestown,” written by Watts in 1719 about a settlement in New York.

“Where nothing dwelt but beasts of prey,/Or men as fierce and wild as they,/He bids th’ oppressed and poor repair,/And build them towns and cities there/They sow the fields, and trees they plant/Whose yearly fruit supplies their want;/Their race grows up from fruitful stocks/Their wealth increases with their flocks.”

Racist? Yes. We Caucasians turned out to be as “fierce and wild” as anyone. But it’s a vivid glimpse into the mind-set of the early settlers of this country. The intense melody, a minor-key dirge, sounds like a good soundtrack for a witch burning.

I Belong to This Band is full of such history and mystery. The amazing thing is how Sacred Harp can sound so otherworldly, yet so American at the same time.

On the Web: There’s plenty of information at the Sacred Heart Musical Heritage Association site at . Lyrics and song titles can be found HERE . And there’s a documentary about Sacred Harp (which I’ve yet to see) called Awake, My Soul. You can find information and some film clips HERE.