ROUNDHOUSE ROUNDUP: HOW TO IMPROVE THE DEBATES

A version of this was published in The Santa Fe New Mexican
Octobber 23, 2008 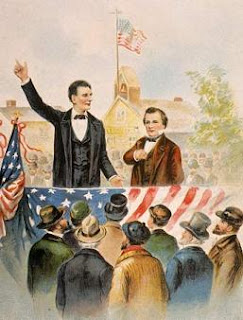 Is anyone out there not sick of candidate debates yet?

Last week, we even had a double-header — the last Barack Obama/John McCain debate followed minutes later by the first Tom Udall/Steve Pearce debate.

As always, there have been a variety of formats and a plethora of rules. Frequently you see the candidates questioned by a panel of journalists, sometimes just a lone moderator.

Often there are questions from audience members (or e-mailed questions from television viewers). Sometimes the candidates have their own podiums or stools or they have to sit together at the same table.

Some formats discourage interaction between candidates. I remember a 2006 state land commissioner debate between Pat Lyons and Jim Baca in which both seemed eager to challenge each other. It could have been an interesting night, but the candidates kept getting interrupted by a moderator who insisted on sticking with the boring rules and kept going on to the next question instead of allowing Lyons and Baca to go at it.

Then there was the state Public Regulation Commission forum sponsored by business organizations this week in which the candidates got the questions in advance and read from scripts. Nobody better complain about “gotcha” questions there.

Here’s a few things I’d do if I ran the debates:

* The first part of the debate would be a town-hall format with questions from unaffiliated voters. But, unlike the recent presidential town-hall forum in Nashville, Tenn., the questions would not be pre-screened and pre-approved by anyone. Trust the people! Sure, you’ll get some pointed questions, maybe even a few rude ones. You might even get a stray nut ball now and then. But seeing how the candidates handle those unpredictable questions would tell us far more than their canned answers to canned questions.

* The second part would be the candidates questioning one another. These segments hands down have been the most interesting part of the debates between Udall and Pearce. Udall made Pearce praise George Bush, while Pearce socked Udall with an unexpected question about some child-porn bill. Back in 2006, it was a question from Heather Wilson about raising taxes that stumped her Congressional opponent Patricia Madrid — and may have helped cost Madrid the election.

* The final third would be a feature I’ve never seen on any debate, though it’s almost always done these days during post-debate coverage by television networks: fact-checking. You’d have to have a team of journalists frantically Googling during the early parts of the debate to see who got what wrong. The moderator would then confront the erring candidate. If there weren’t enough provable errors, then the rest of the time could be filled by more questions from the audience — or by the candidates.

Of course, if one candidate got his facts wrong significantly more than the other, his supporters would complain that “the media” was biased against him. But chances are, they’re going to make that claim anyway so let ‘em squawk. 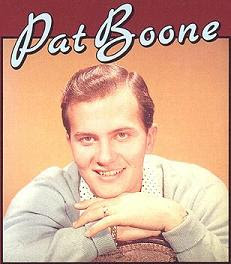 Actually, it’s not technically an endorsement, but the 1st District Congressional campaign of Republican Darren White on Wednesday released a statement announcing that singer Pat Boone had presented White with an Honorary Guardian of Seniors’ Rights award.

Boone is national spokesman for a group called the 60 Plus Association — “a non-partisan seniors advocacy group with a free enterprise, less government, less taxes approach to seniors issues,” according to the group’s Web site.

“I am pleased to present this award to Darren White,” Boone said in a statement. “He is a tax cutter, protecting the pocket books of senior citizens. 60 Plus calls on nearly 5 million seniors for support so I believe I can speak on behalf of seniors when I say that they can count on Darren White. Clearly, seniors will have no finer friend in Congress than Darren White.”

Boone praised White for opposing “the death tax,” which actually is called the estate tax.

But the most interesting claim on the news release was the description of Boone — “a recording artist, movie and TV star second to none in the 1950s, 60s and 70s.”

Second to none? Elvis Presley, Chuck Berry, Little Richard, Bo Diddley, Jerry Lee Lewis and a few dozen others might take issue with that — and that’s just dealing with the ’50s.

Blog Bonus: I wonder if Pat Boone would groove on the cop-rock band that was second to none in the early 90s, Darren White & The Force.

Where the heck is Bill Richardson? The traveling governor was on the campaign trail again this week, this time in Florida. He was there Tuesday and Wednesday, attending Obama campaign events in Palm Beach, Immokalee, Port Charlotte, Tampa and Kissimmee. This is according to various online newspaper reports. The governor’s office doesn’t make public announcements of when the governor leaves the state.

Next week, according to The Sandusky Register, Richardson will be in Erie County, Ohio.
at October 23, 2008