A version of this was published in The Santa Fe New Mexican
October 2, 2008

A quick trip to the microfilm room of the state library reveals the racetrack under the Hensleys more than 50 years ago was the source of scandal involving allegations of arson, death threats, political corruption and organized crime. Not the type of family history you find in campaign literature. 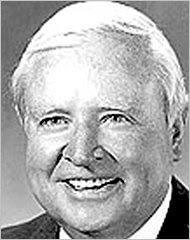 Jim and Gene Hensley purchased the track in Ruidoso in late 1952. This followed some trouble in Arizona. There, in March 1948, a federal court jury convicted the brothers of “making false entries to the government on distilled liquor sales,” according to an Associated Press account. Jim Hensley got a six-month suspended sentence. But his older brother Gene was sentenced to a year and served nine months in a federal prison camp.

But the convictions didn’t stop the New Mexico Racing Commission from granting the Hensleys a license to run the track. No state law at the time barred convicted felons from operating racetracks.

Jim Hensley, Cindy McCain’s father, sold his share of Ruidoso Downs in 1955 and returned to Phoenix, where he started working for a beer wholesaler. Later, he bought the company.

He left New Mexico just before things got interesting in Ruidoso.

The summer of ’55: The state had ordered an audit of the track in June 1955. During that time, a lawsuit was filed by a Phoenix man named Clarence “Teak” Baldwin, described as a “nightclub owner and gambler,” who claimed he owned a third interest in the racetrack. Baldwin, who ran a food concession at the track, had a police record in Arizona. According to a 1977 story in the Albuquerque Journal, Baldwin was accused by some of his customers of “doctoring the drinks and then fleecing (the customers) in gambling games.”

The Hensley brothers had denied Baldwin’s involvement in Ruidoso Downs at a Racing Commission hearing in 1953.

By the end of July, things started getting ugly in Ruidoso. In a period of just a few days, according to stories in The New Mexican by reporters Bill Bailey and Neil Addington, a state police officer was assigned to protect a Racing Commission secretary performing the audit after threats to the secretary’s life; a stables fire, suspected as arson, killed 22 horses; and two days after the fire, someone poisoned two race horses.

In August 1955, Racing Commissioner Oliver “Hop” Lee resigned after The New Mexican revealed his financial entanglements with Ruidoso Downs. He owned stock in the company and had loaned it $60,000. Lee had received at least two checks from the company — $4,000 for interest on the loan and $8,000 for “personal services.” Lee was part of a partnership that had sold the track to the Hensleys.

The paper also showed that the mother-in-law of Racing Commission Chairman B.M. “Red” Keohane owned stock in Ruidoso Downs. Both Lee and Keohane had accepted gifts from the company, including hats valued at more than $100 (and that’s in 1955 money). Keohane told The New Mexican he saw nothing wrong with accepting gifts from organizations he’s supposed to regulate.

His spirit still lives in the Roundhouse every time the Legislature defeats ethics bills.

Simms blasted Mechem for allowing the Hensleys to get the license in the first place. However, someone identified only as “an authentic and unimpeachable source” told Albuquerque Journal columnist Ed Minterm in 1955 that Mechem had warned Simms about Ruidoso.

“The current operators, the Hensleys, now under fire, were under constant surveillance” during Mechem’s watch. “No action was taken against the Hensleys because the investigation showed that as tracks go, all the laws were being observed. But Mechem prodded the Racing Commission to be alert because he was worried about it.”

A Phoenix businessman: According to the Aug. 4, 1955, New Mexican, Keohane, asked why he approved the Ruidoso racing license in the first place, said “he considered the Hensleys a good risk because of their association with a Phoenix businessman.” 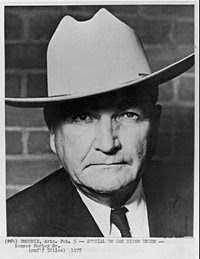 However, the paper pointed out that a state police report given to the commission in 1953 “shows this ‘businessman’ has a long police record in falsification of records with the (Hensley) brothers.” He also owned a racetrack wire service in Phoenix that was connected to the bookie operation of famed Chicago gangster Al Capone.

The businessman in question was Kemper Marley, a millionaire rancher and liquor distributor who had employed Jim and Gene Hensley in the 1940s when they were convicted in federal court. His racing wire service at one point was managed by Baldwin.

Marley, who died in 1990, was a suspect in the 1976 car bombing death of Arizona Republican investigative reporter Don Bolles. John Harvey Adamson, the only person convicted in the killing, said in court documents that he’d been hired by an Arizona contractor to kill Bolles for writing articles damaging to Marley.

Marley was never charged in the case. He sued Investigate Reporters and Editors Inc. and won $15,000 in damages for emotional stress over an article the group published about the Bolles case. But that jury, according to Marley’s obituary in The New York Times, found IRE did not libel Marley or invade his privacy.

The state took over Ruidoso Downs in August 1955, but that didn’t last long. Gene Hensley hung on to the track until 1969. Three years earlier, he was convicted of tax evasion and was imprisoned in La Tuna, Texas.

According to The New York Times, Gene Hensley and his former wife sold their shares in Ruidoso Downs to a company connected with Marley. The track currently is owned by R.D. Hubbard, who bought it in 1988.

The Phoenix New Times in 2000 published a lengthy article about McCain and James Hensley. (CLICK HERE.) The Hensley era at Ruidoso Downs is discussed on pages 3 and 4.
at October 02, 2008