A version of this was published in The Santa Fe New Mexican
October 16, 2015 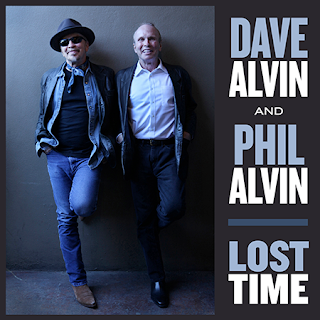 If you rate albums on the basis of how many times you find yourself singing its songs to yourself during the day, then Lost Time by Dave & Phil Alvin would definitely be the top record of the year.


Seriously, I’ve lost count of the times I’ve caught myself — in my car, at home, during interviews with important political leaders (just kidding, just kidding) — humming or singing under my breath “Papa’s on the House Top” or “In New Orleans (Rising Sun Blues)” from this cool little album. I can’t help myself. The only places I’m immune to it are at the farmers market or the produce section of supermarkets. And that’s because at those places I’m usually singing Brian Wilson’s “Vegetables.” (I’m sure there is a name for this disease.)

Before we go on with my true confessions, let’s talk about these Alvin brothers for the benefit of the uninitiated. Back in the early ’80s, these Downey, California, natives were the core of one of the greatest groups of the era, the Blasters. Older brother Phil sang while Dave played guitar and wrote songs for the band, which was part of an impressive and highly influential Los Angeles roots-rock scene that included Los Lobos, country singer Dwight Yoakam, and the punk gods X. (Dave Alvin was briefly a member of X.)

And even before the Blasters, Dave and Phil were obsessed with the senior blues, early rock, and R & B giants who were still alive and pickin’ in the late ’60s and ’70s. They’d sneak into clubs like the Ash Grove and sometimes even hang out with rasty old blues heroes old enough to be their grandfather.

By the mid-’80s, after four studio albums and untold amounts of sibling rivalry (Google “The Kinks”), the Blasters broke up. Dave, after his stint with X (and X’s side project, the Knitters) went on to a successful solo career.

Phil did a couple of solo albums, most notably Un “Sung” Stories, a 1986 effort that included some tracks with Sun Ra’s Arkestra. He also revived the Blasters — without Dave, though little brother Dave has occasionally reunited with the group. Back in 2011, Phil did a guest spot on a song on Dave’s album Eleven Eleven — a song appropriately called “What’s Up With Your Brother?” It was the first time the two had recorded together since the Blasters’ heyday.

Then last year — following an abscessed tooth infection that hospitalized and nearly killed Phil — the two did an actual album together, Common Ground, a tribute CD featuring songs by blues titan Big Bill Broonzy. Apparently that album wasn’t just a one-shot deal. On Lost Time, the brothers sound as if in their late middle age, they’re actually enjoying making music with each other again. Like the Broonzy album, there are jaunty acoustic country-blues numbers as well as hard-edged, Blasterific blues.

The album starts out with “Mister Kicks,” a song by under-recognized (nearly forgotten) R & B/pop singer Oscar Brown Jr. from his masterpiece 1960 album, Sin & Soul. Nearly a decade before The Rolling Stones’ “Sympathy for the Devil,” Brown, backed by beatnik bongos, sang, “Permit me to introduce myself, the name is Mr. Kicks/I dwell in the dark dominion way down by the River Styx.” There are no bongos in the new version, but in the hands of the Alvin brothers, the song becomes a natural vehicle for Phil’s soulful tenor and Dave’s piercing guitar.

Another standout on Lost Time is “Sit Down, Baby,” an old Otis Rush chugging tune (written by Willie Dixon) that Dave sings. It starts off with a classic blues meme about “the little red rooster” talking to “the little brown hen” and then moves seamlessly to a new take on the Aesop fable with a hepcat turtle taunting the rabbit (“You ain’t got a chance of winning this race!”). Then it gets into politics with a verse about an old labor dispute: “The C.I.O told U.S. Steel/We ain’t gonna take your dirty deal.” The Alvins added a verse about Rosa Parks (she tells an Alabama judge that it’s time for him to sit in the back of the bus) that wasn’t in Rush’s original.

Dave and Phil do a couple of tasty upbeat gospel songs here. The brothers trade off verses on an electric (and electrifying) version of “World’s In a Bad Condition,” an old song. (I can’t say for sure who did it first, but I found a 1935 version by a quartet called Heavenly Gospel Singers on YouTube.) And the album concludes with a Rev. Thomas A. Dorsey song, “If You See My Savior.” The brothers do this in a sweet acoustic country style. They sing this as a call-and-response, with Phil calling and Dave responding.

As for those memorable songs that always seem to pop into my brain, “Papa’s on the House Top” is a funny old 1930 novelty by blues pianist Leroy Carr. “In New Orleans (Rising Sun Blues)” is a version of the old whorehouse lament, “House of the Rising Sun.” But you might not recognize the melody. Gone is the slow pace and minor key that The Animals (and Bob Dylan and Josh White and countless others) popularized. I can’t quite figure out where the melody the Alvins use came from, but to my ears, it sounds closer to the 1933 version by Tom Clarence Ashley and Gwen Foster than to anything else.

Not every song on Lost Time is a winner. While Phil does a respectable job on “Please Please Please,” I can’t see anyone ever topping James Brown’s original.

But there are so many great tracks here, that’s just a slight quibble. I hope Dave and Phil continue to demonstrate together the Alvin family values.

UPDATED 10-17-15 I'm adding this on Saturday, the day after I posted the original version of this Tune-Up. I just learned this morning that this new video of the Alvins singing  “World’s In a Bad Condition” debuted Friday on the Relix site. And it's a good one!


Dave and Phil play a song from their previous album, Common Ground.

On this one, the brothers play a couple of old Blasters tunes

Here is an early version of "This Old World is on Bad Condition."


And please allow me to introduce you to Oscar Brown, Jr. and "Mr. Kicks."