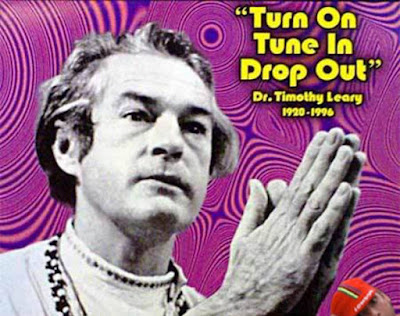 Dr. Timothy Leary, Harvard professor, psychedelic shaman and, for a few years, an international fugitive, would have been 95 years old today.

Though most remember Leary for his advocacy of LSD and his oft-quoted catch phrase, "Turn On, Terrell's Tune-Up and Drop Out" (that was it, right?), he also has a musical legacy, which we'll celebrate here. (And I'm not talking about that dreary Moody Blues song, so don't even ask.)

For one thing, he had this affinity with John Lennon.

The introduction of the 1964 book The Psychedelic Experience, written by Leary, Richard Alpert and Ralph Metzner, contains this advice to trippers;

Trust your divinity, trust your brain, trust your companions.
Whenever in doubt, turn off your mind, relax, float downstream.

You might recognize that line which appeared a couple of years later on The Beatles' Revolver in one of the most psychedelic tunes the Fab Moptops ever recorded.

Leary actually appeared on a Lennon record. He was one of a whole gaggle of counter-culture celebs who sang background on "Give Peace a Chance." And according to several accounts, that led, eventually to another Beatles song

According to the Beatles Bible web site:

The following day Lennon offered to help Leary's campaign [an aborted third-party run for governor of California.] His slogan was 'Come together, join the party'. Lennon sent Leary a demo tape of song ideas. However, when Leary was imprisoned for cannabis possession the campaign ended, enabling Lennon to record the song with The Beatles.
,
Lennon told interviewer David Sheff:

Yes, Leary's imprisonment on a 1968 marijuana arrest saved "Come Together" from becoming a political jingle.

But that 10-year (!) sentence also led to Dr. Leary fleeing the country. He was living in Switzerland in 1972 when he hooked up with a German band called Ash Ra Tempel. Together they recorded a crazy, psychedelic album called Seven Up. Leary's spoken-word vocals fade in and out all through the record. The record starts out as a hippie blues exploration but quickly drifts into spacey pyschedelia.

Near the end of his life in 1996, Leary recorded an album with rocker Simon Stokes under the name of-- brace yourself, Bridget --LSD (Leary Stokes Duets). The album was called Right to Fly, and while I prefer Stokes' own records, this one has it's weird charm.

Here's one of my favorite tracks from it.