TANGLED UP IN HIBBING

Note: I didn't do a Terrell's Tune-up this week because I had to do some reviews of Santa Fe Film Festival movies. This one was published this week. Others will be next week.

A version of this was published in The Santa Fe New Mexican
December 1, 2006

No Bob Dylan fan will want to miss Mary Feidt’s Tangled Up in Bob. But don’t expect to find much of Dylan in this search for the roots of his genius. There’s not much actual Dylan music here and little footage of Dylan concerts. (There is an all-too-brief audio clip of Bobby Zimmerman singing “Tutti Frutti” at a high-school talent show.) 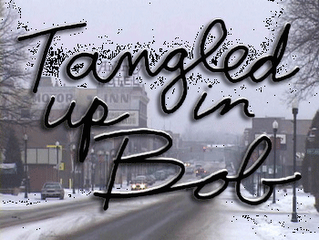 But this is a look at the world from which he came, the world that shaped him, and the world he fled as soon as possible. And the movie ends up being as much about Taos writer Natalie Goldberg — who serves as the on-camera guide for the film — as it is about Dylan.

Goldberg is not only a fan of Dylan’s music (“It’s knockout. It’s just totally changed my life.”). She also identifies with his early life. She grew up in a small town on Long Island, New York, where she felt like “the lone Jew.” “I think I’m always looking for examples to live my life by,”
Goldberg explains to a man who knew Dylan as a youth. She says she probably wouldn’t be as interested in Dylan if he weren’t “Jewish and didn’t come from a small town where he was an oddity. ... The fact that he’s Jewish and the only Jew from up in a town, Hibbing, up in the Iron Range in Minnesota — if he can do it, I can do it.”

After going to Hibbing, Goldberg realizes her assumption about Dylan being the only Jew there wasn’t correct. She even finds his old synagogue. Goldberg visits the house in which the singer grew up, chatting with the young family who lives there now and sitting on a bed in his old room. “He grew out of a real life, not some imagined fantasy world,” she says. She talks to old friends and neighbors of the kid who started out as Bobby Zimmerman.

“I’m not a fan. But it’s nice to see the notoriety that he gets from people,” a former neighbor says in an interview at a Hibbing tavern. But Dylan’s not the only celebrity to come out of Hibbing. This man seems more impressed that it’s the hometown of basketball star Kevin McHale, who played with the Boston Celtics and is now an executive with the Minnesota Timberwolves.

One former classmate of Dylan’s told of a cynical old miner who said he did not believe Dylan wrote his songs. “He paid somebody to write them for him,” the old miner claimed. “Iron Range people, as a rule, do not want to give credit where credit is due,” the classmate explains. “They’re pessimistic largely because of the boom-and-bust cycle of the mines.”

Goldberg goes to the iron mine that was the chief livelihood of the town. She goes to a polka dance. And she goes to Dylan’s high school.

Her favorite discovery in Hibbing is Dylan’s high-school English teacher, B.J. Rolfzen, whom she describes as “someone who loved literature from the inside out with his soul and spirit, not as some intellectual understanding.” Later in the movie, Goldberg says she connected with Rolfzen because she had two great English teachers “who saved my life” in high school.

Unlike the basketball fan at the bar, Rolfzen describes Dylan as “a Shakespeare for this age.”

The most touching scene is when the elderly teacher sings along to a recording of Dylan’s ode to mortality, “Not Dark Yet.” Sitting at his kitchen table, Rolfzen reverently bows his head as he sings. “I like the line, ‘I was born here and I’ll die here against my will.’ Same here. If I had a choice, here’s where I would stay. They can have the other side, whatever it may be. ... This is the world for me.”

“I can see how this place might have been boring for Bob Dylan in the ’50s,” Goldberg says, walking down a Hibbing thoroughfare. “But, you know, maybe that boredom gave him something. He was empty when he left here, and he was free to be a conduit for all that came through him.”

It does look a little boring. And some of the people seem a little thick — like the young music-store employee who says that the only Dylan song he’s ever heard is “Forever Young,” which was sung at his graduation.

To Goldberg, Hibbing is “some old dream I’ve had of America. Small, Midwestern, brick buildings, storefronts, people knowing each other.” But spending time in Hibbing via Tangled Up in Bob leaves you feeling anything but empty.