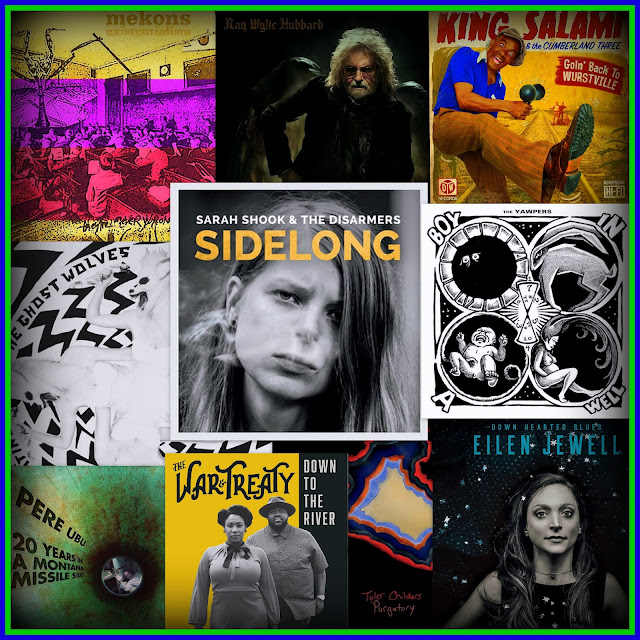 *  Sidelong by Sarah Shook & The Disarmers. On my very first listen, I was a fan by the end of the first two tracks: “Keep the Home Fires Burnin’ “ (with its beyond catchy melody, similar to the bluegrass classic “Rocky Top”) and “The Nail” (a love-gone-wrong honky-tonker with some fine guitar and lap steel in which Shook sings, “Well, I ain’t your last, you ain’t my first/You can’t decide which fact is worse”). With her voice sporting more than a hint of a whiskey rasp, Shook sounds as if she’s the punk-rock granddaughter of Hazel Dickens.

*  Texa$ Platinum by Ghost Wolves. This Austin band made some of the finest garage rock I’ve heard all year. Singer Carley Wolf has a pixieish voice that wouldn’t seem out of place in some of my favorite Japanese girl-punk bands. Actually, the first time I heard her, I thought of KatieJane Garside, the singer of the early-’90s group Daisy Chainsaw (“Love Your Money”). Carley is also a heck of a guitarist. Her hubby Jonathan is not only downright powerful on the drums, he also adds subtle iggly-squiggly, sci-fi synth effects.

*  Boy in the Well by The Yawpers. This rowdy little band from Denver has created one of the most rocking little albums of the year. With big sonic traces of The Gun Club, ZZ Top, The Legendary Shack Shakers, and their own twisted take on rockabilly, The Yawpers rip through most these songs with an urgency that’s undeniable. And the whole thing centers on a bizarre story of a World War I love child who, yes, spent most of his life in a well — before he emerges and unleashes a series of Oedipal wrecks.

*  Tell the Devil I’m Gettin’ There As Fast As I Can by Ray Wylie Hubbard. Another fine revelation from the crusty old Texan, who only seems to get tougher and ornerier with age. Like the Bible, the album starts out with the creation story — a song called “God Looked Around,” in which Hubbard, in his knowing drawl and slow-moving guitar, tells the story of the origin of the universe, Adam and Eve, and that pesky snake. But the next song, “Dead Thumb King” goes right to the hoodoo, as Hubbard explains that he’s armed with “some dirt from Lightnin’ Hopkins’ grave,” “bones from an old black crow,” and a “rattlesnake tail inside my guitar.”

*  Goin’ Back to Wurstville by King Salami & The Cumberland 3. This hopped-up, high-energy London-based band has been around for more than a decade, but despite my overly optimistic prediction a few years ago, they never really have made a huge splash in the good old USA. That’s our loss, my fellow Americans. With Salami and the Cumberlands’ seamless bend of garage-rock, ’50s and ’60s R&B, and occasionally a little instrumental surf music, few bands match their sound in terms of pure fun.

*  20 Years in a Montana Missile Silo by Pere Ubu. This is the most outright rocking studio album Ubu has unleashed in about a decade, maybe longer. No, the band, which emerged during the punk and New Wave scare of the late ’70s, hasn’t forsaken their heritage of avant-garde, experimental, atmospheric sounds. But they also haven’t forgotten how to make your feet move and head bang either. The group’s foundation was garage and surf rock — colored by darkly bizarre lyrics, David Thomas’ warbling vocals, and Plan 9 From Outer Space-esque  synth noises. And Missile Silo shows that foundation is strong.

*  Purgatory by Tyler Childers. This twenty-six-year-old guitar slinger from Kentucky writes and sings songs that sound timeless. Covering evergreen hillbilly themes, he tells tales of good moonshine, bad drugs, an all-seeing God, a powerful devil, and the joys of love and sex. Some tracks have a pure outlaw country sound, while some come right out of the world of bluegrass. Purgatory was produced by Sturgill Simpson. And it shows.

*  Existentialism by The Mekons. Technically, this album was originally released in 2016, but it was part of a fancy, expensive “limited edition” package. But this year, Bloodshot Records released it as a single (and affordable) CD. Recorded live at a small club in Brooklyn a couple of years ago, this album has all the things Mekons fans love — rowdy barroom singalongs over inexplicable ambient noise, nods to Hank Williams and dub reggae, and lyrics that seem soaked in alcohol and revolutionary fervor. Speaking of which, the song “Fear and Beer,” subtitled “Hymn for Brexit,” is as sad as it is lovely.

*  Down to the River by The War  and Treaty. Singer Michael Trotter Jr. has one of the greatest music biographies I’ve ever seen. He was a soldier during the invasion of Iraq and was assigned to guard one of Saddam Hussein’s palaces after the strongman was driven from power. In the basement of the building, the occupying Americans found an old piano said to have belonged to Saddam himself. Trotter taught himself to play on that abandoned instrument, writing his first song, a tribute to a fallen captain. But even without that crazy back story, this music, on which Trotter shares vocal duties with his wife Tanya Blount, is soulful, bluesy, and rootsy.

*  Down Hearted Blues by Eilen Jewell. Can a white girl from Idaho sing the blues? Should a white girl from Idaho sing the blues? I’ll leave those important questions to the guardians of political correctness. All I know is that on this collection of old songs — mainly obscurities, spanning Memphis Minnie to Howlin’ Wolf — Jewell pulls it off with grace and grit. A former St. John’s student who used to busk at the Santa Fe Farmers Market, Jewell even includes a great hillbilly blues song here, Moonshine Kate’s “The Poor Girl’s Story.”

Just to show how obsessive I can be I created a new tag on this blog for my annual Top 10 album lists. If you're as bored as I am obsessive, you can go back to the very early days of this blog and see what albums I liked best between the present and 2003. CLICK HERE

Finally here's a Spotify list featuring a couple of tracks from each of my favorite 20017 albums.