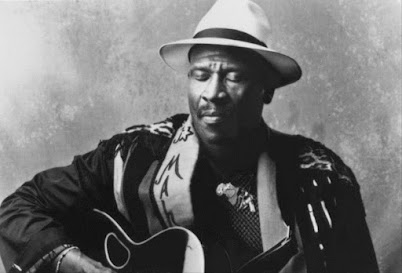 As a young music dog growing up in the 1960s, I first became acquainted with great American blues artists due to the noble efforts of British rockers like The Rolling Stones and The Animals. And later my appreciation of blues from bygone eras grew deeper -- especially country blues artists -- thanks to the noble efforts of contemporary musicians like Henry Saint Clair Fredericks, better know to the free world as Taj Mahal.

Taj is still kicking at the age of 78. And some of those old songs he recorded are immortal. Here are just a few of them.

The opening line of the song, "If the river was whiskey and I was a diving duck" has been used in some adaptations of another song, "Hesitation Blues," (sometimes called "If the River Was Whiskey,") which Taj also covered. This is a 1930 version of that by hillbilly giant, Charlie Poole:

This probably is my favorite Taj song ever. He got it from Henry Thomas, a Texas-born bluesman who recorded it in 1928. Before I was familiar with Taj's version of "Fishing Blues," I'd already heard The Lovin' Spoonful's stab at it. Taj's version though sounded true and authentic.

And, leaving the realm of country blues, Taj did a funky version (with Linda Tillery) of R&B titan Louis Jordan's "Beans and Cornbread."

If you enjoyed this, checkout some similar posts on this blog: