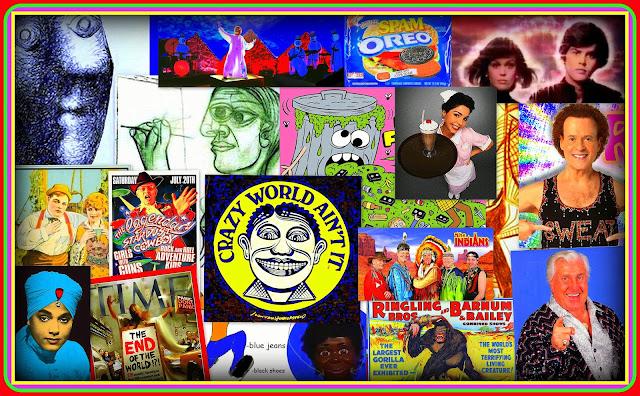 As I wrote back then, Wacky Wednesday, was created,  "to introduce you, the reader to strange, funny and/or confounding music -- the type of "unclaimed melodies" that the Firesign Theatre's Don G. O'Vani was talking about when he said, `if you were to go into a record store and ask for them they would think you were crazy!' "

I've tried to live up to that mission statement, doing my best to fill your hearts with wackiness each Wednesday this past 12 months. Some weeks I spotlight music that's supposed to be funny, sometimes it's music by artists who aren't comedians but make music that can't help but make you smile.

Sometimes I just throw pies of weirdness in your face and hope nobody gets injured.

Below is a small sampling of the music that hopefully made your Wednesdays a little wackier.

Early in the year, I explored Korla Pandit's Universal Language of Music.

The world of Golden Throats is always a goldmine.

And so is the realm of outsider music.

Late last November we had a 1960s Battle of the Bands between Mr. Gasser & The Weirdos and The Weird-ohs in Airplane Glue Rock 'n' Roll. Here's Gasser and the boys ...

One Wednesday a few months ago I devoted a post to songs about serial killers. And a few months before I did one with songs about Jeffrey Dahmer. Both posts included this video from Dead Moon, featuring the late, great Fred Cole, and their ode to  Dahmer, "Room 213."

The Found Footage Festival is a fountain of weirdness -- including lots of musical weirdness.

And speaking of the Irish I caught some (probably deserved) flack for even calling attention to this culturally insensitive band of Micks who have a thing for (fake) Native American culture. (I can call them "Micks." I'm part Paddy.) Someone should have given these guys the advice in this song -- Don't go near the Indians!!!