A version of this was published in The Santa Fe New Mexican
Jan. 4, 2018 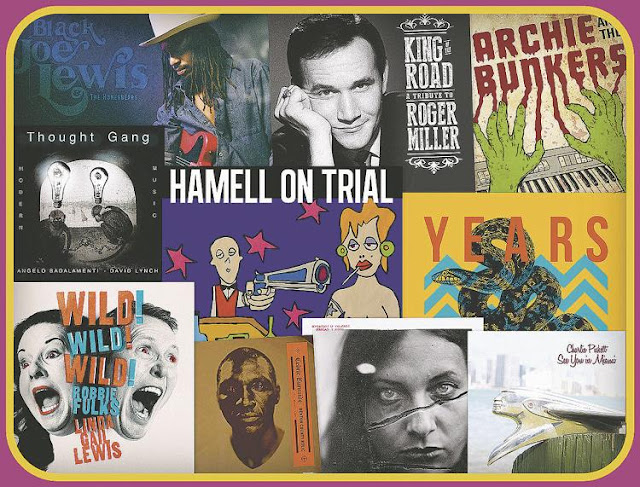 Here is a list of my favorite albums released in 2018.

* The Difference Between Me & You by Black Joe Lewis & The Honeybears. Longtime fans of young Black Joe should immediately realize that this record is a back-to-basics move for this Austin band. The Honeybears still have their excellent funky horn section, and a handful of songs here are closer to sweet soul ballads than rump-rousing rock. But the overall sound of Difference is raw and rowdy, with roots stretching back to Bo Diddley and Howlin’ Wolf.

* The Night Guy at the Apocalypse Profiles of a Rushing Midnight by Hamell on Trial. This basically is a song cycle by singer/songwriter Ed Hamell centered around a fictional hardcore dive called The Apocalypse, which is populated by drunks, drug addicts, backdoor beauties, angel-headed hipsters, small-time criminals, and tough guys. It’s a lo-fi affair recorded in its entirety on Hamell’s iPhone in various locales.

* Songs from the Lodge by Archie and the Bunkers. Kids these days, conventional wisdom goes, don’t love rock ’n’ roll like we did when I was a lad. But not these two teenage brothers from Cleveland. Drummer Emmett and organ player Cullen O’Connor have a unique high-energy sound they call “hi-fi organ punk.” Plus, they do a couple of songs here about Twin Peaks: “Fire Walk With Me” and “Laura.” These kids not only have talent, they have taste.


* Thought Gang by David Lynch and Angelo Badalamenti. Speaking of Twin Peaks, this album — full of avant-garde jazz, synthesized rumblings, and sinister beatnik-style poetry — is required listening for anyone who claims to be a fan of David Lynch and his musical henchman Angelo Badalamenti. Recorded in the early 1990s, the music is spooky, unsettling, and sometimes even funny.


* See You in Miami by Charlie Pickett. This guitar singer from Florida had an enthusiastic regional following back in the early-to mid-’80s, but he jettisoned his musical career to become a lawyer in Miami. This album, Pickett’s first original-material release in decades, picks right up from his ’80s
heyday. He still does songs that sound like ZZ Top trying to rewrite The Rolling Stones’ Exile on Main Street.


* Wild! Wild! Wild! by Robbie Fulks & Linda Gail Lewis. Fulks takes a break from the heaviness of his recent work and tears up the honky tonk with a boogie-woogie country gal on this duet album with rockabilly royal Lewis. And Lordy, it’s fun. Wild! is full of rockabilly romps, country weepers, blue-eyed soul, bouncy blues, sweet harmonies, drinkin’ songs, cheatin’ songs ... the sounds that made America a beacon of the free world.


* Benton County Relic by Cedric Burnside. If anyone thought that Mississippi Hill Country blues died with R.L. Burnside — or T-Model Ford or Junior Kimbrough or Paul “Wine” Jones — get your ears on this album and think again. Cedric, who is R.L.’s grandson (and former drummer) has those
blues in his blood. Like the work of all those ascended masters, Cedric’s music is rough, raw, and sometimes hypnotic. Somewhere up above, R.L. is looking down smiling, saying, “Well, well, well ...”


* Years by Sarah Shook & the Disarmers. I was somewhat apprehensive when I got a copy of this album. How could it be anywhere as good as her debut, Sidelong, coming just a year later? Am I bound to be disappointed? But I wasn’t. Her sophomore effort is full of impressive tunes about love gone sour. But there is little, if any, confessional self-pity. Shook’s confidence, pride, and humor frequently shine through the heartache.


* A History of Violence by Harlan T. Bobo. Despite all the songs about romance gone wrong and the tensions between a man and a woman — and the fact that the Memphis rocker got divorced between his previous album and this one, Bobo has said this is not a breakup album. Either way, the songs here are packed with frustration, desperation, and loneliness. And some of the hardest rocking tunes are obviously dark fantasies of wanton violence.


* King of the Road: A Tribute to Roger Miller by various artists. It’s true that most tribute albums suck the warts. But partly because Miller really was one of the greatest songwriters to ever live — and partly because of the caliber of the talent that producer (and Roger’s son) Dean Miller has
wrangled for this project — nearly every track is a winner. The songs capture Roger’s wide emotional range: the funny tunes, cool anthems, honky-tonk stompers, and surprisingly powerful heartache songs. Standout tracks include the stunning bluegrass cover of “When Two Worlds Collide” by the female-fronted band Flatt Lonesome; a soulful take on a little-known Miller song called “I’ll Pick Up My Heart and Go Home” by Lily Meola; “The Last Word in Lonesome Is Me,” by Dolly Parton and featuring Alison Krauss; and the slow, jazzy “Lock, Stock, and Teardrops” by Mandy Barnett.

The Beast Is You by The Electric Mess

Psychic Action by The Vagoos

Trouble and Desire by The Callas with Lee Ranaldo

Blues Trash by The Reverend Beat Man & The New Wave

Soul Flowers of Titan by Barrence Whitfield & The Savages

In This Time by The Ar-Kaics

UPDATED Jan. 6, 2019: Here's a Spotify playlist with 2 songs each from the Top 10 albums and one each from the "honorable mentions" (except Holly Golightly's, which isn't available on Spotify)