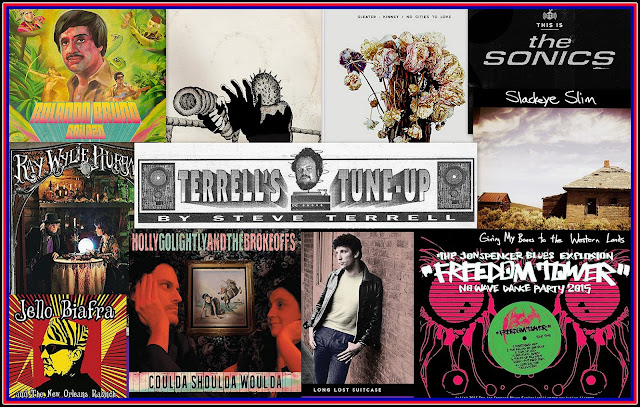 Happy New Year, dear friends! Here is a list of my favorite albums of 2015. This list is in no particular order, but at some point throughout the past year, each one was my number-one favorite for at least a few days.

1) This Is The Sonics . Unlike The Standells, Question Mark and The Mysterians, Sam the Sham and The Pharaohs, and other giants of the garage-rock era of the mid-1960s, The Sonics didn’t get much radio play where I grew up. Thus, I didn’t really get exposed to them until well into my adulthood. And I didn’t become a complete babbling devotee of their cult until just a couple of years ago when I saw The Sonics — with three original members — rage, ravage, and conquer the Ponderosa Stomp festival in New Orleans. This is the band’s first studio album of all-new material in nearly 50 years, and it rocks harder than anything by any young whippersnapper I heard all year.

2) Mutilator Defeated at Last by Thee Oh Sees. John Dwyer is a miserable failure at hiatus. His attempt at putting Thee Oh Sees on the shelf only lasted a few months before he was back with a new line-up, which I begrudgingly have to admit is just as ferocious as the previous incarnation. The sound of Mutilator is unmistakably Oh Sees: rubbery post-psychedelic guitar-based excursions into the unknown with distorted echoes of garage rock, punk, and noise-rock.

3) Freedom Tower — No Wave Dance Party 2015 by Jon Spencer Blues Explosion. This album, the Blues Explosion’s second since the band’s resurrection with 2012’s Meat + Bone, is a loving song cycle about New York City. In several tunes, the band indulges in a little well-earned nostalgia about the sleazy, crime-ridden era of the ’70s and ’80s, those gritty days when punk rock, hip-hop, and yes, “No Wave” were born. Jon Spencer and the boys are as loud, frantic, and joyful as they were in their mid-’90s heyday.

4) The Ruffian’s Misfortune by Ray Wylie Hubbard. Once again, Ray Wylie Hubbard has given the world a swampy, blues-soaked collection of tunes in which, in his trademark Okie drawl, he tells stories of sin and salvation; gods and devils; women who light candles to the “Black Madonna;” undertakers who look like crows (“red-eyed and dressed in black”); and hot-wiring cars in Oklahoma.

5) No Cities to Love by Sleater-Kinney. These women are far better at hiatus than Thee Oh Sees. Sleater-Kinney’s little break lasted about 10 years. They roared back this year, though, with a mighty tour (including a memorable show in Albuquerque in April) and this new album. It’s brash, urgent, and emotional. And they make it seem so easy.

6) Long Lost Suitcase by Tom Jones. No, I’m not being ironic here. In 2015, Tom Jones — the old British pop star who sang “It’s Not Unusual,” the cheesy ’70s TV star and Las Vegas sex symbol at whom grown women threw their underwear — made one of the year’s finest albums. I was drawn in by his haunting cover of Gillian Welch’s “Elvis Presley Blues,” but I stayed for his rocking version of Billy Boy Arnold’s “I Wish You Would,” and Los Lobos’ “Everybody Loves a Train” – not to mention his stark take on one of my favorite early Willie Nelson tunes, “Opportunity to Cry.” I was so impressed, I sought out Jones’ previous albums with producer Ethan Johns — the gospel-drenched Praise & Blame and Spirit in the Room. Jones’ powerful voice is still in impeccable form and his taste in material has never been better.

7) Giving My Bones to the Western Lands by Slackeye Slim. On his latest album, Joe Frankland, aka Slackeye Slim, continues his exploration of the shadows. As usual, many of his songs are frequently cast in an Old West setting, though his themes of sin, redemption, loneliness, desperation, and freedom are universal. Slackeye lived among us in New Mexico for a few months, forming a sinister musical alliance with The Imperial Rooster, an Española band. He’s moved back to Colorado, but promises he won’t be a stranger.

8) Walk on Jindal’s Splinters by Jello Biafra & the New Orleans Raunch and Soul All-Stars. This is a live New Orleans concert by former Dead Kennedys frontman Jello Biafra that was reportedly done on a dare. Teaming up with a rootsy but raucous band (including a horn section), the West Coast punk-rock icon blasts his way through a bunch of Big Easy R & B classics.

9) Bailazo by Rolando Bruno. This is my choice for world-beat heavyweight champion of 2015. Rolando Bruno’s label, Voodoo Rhythm Records, describes his sound as “Full Blast Psychedelic Latino Cumbia Garage with a very Cheesy Touch of a ’70s Supermarket!!!” Bruno, a former member of the Peruvian garage-punk band Los Peyotes, also throws in Middle Eastern riffs, kung-fu movie soundtrack sounds, and other surprises to create a wacky but very danceable brew.

10) Coulda Shoulda Woulda by Holly Golightly & the Brokeoffs. Holly Golightly and her partner “Lawyer Dave” Drake continue their streak of bare-boned funky-clunky country bluesy albums. Golightly is a native Brit, but this is a big sloppy homemade American mess, which of course I mean as a compliment. The whole album is packed with crazy fun.

* Under the Savage Sky by Barrence Whitfield & The Savages

* So Delicious by The Reverend Peyton’s Big Damn Band

* Ballsier by The Grannies